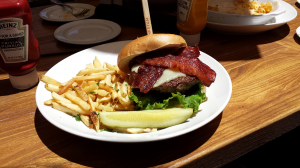 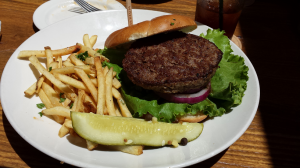 San Diego Burger Club went to Karl Strauss on Scranton today.  Many of us work at Qualcomm so we were overdue for rating “Building K”.

The bottom line is that the burgers got a B/B-.  We think you should go there for the atmosphere, beer, and mac and cheese (not necessarily in that order), rather than the burger.

This area cries out for restaurants like Karl Strauss and there is a lot of good food on their menu and plenty of different beers plus a nice atmosphere to keep you entertained.  The burger just isn’t a signature dish there.  It looks good on the plate, but it is very plain.  So are the fries.  There also were a couple of slip-ups with our order:  one burger was missing bacon (that was later rectified), and one burger was ordered with no cheese yet it had some cheese on it.

Speaking of cheese, the mac and cheese at Karl Strauss is where it’s at.  Their menu describes it as follows:  “Our Mac and Cheese is kind of a big deal. Made with large elbow noodles, gorgonzola, gruyere, cheddar cheese, and a crispy parmesan breadcrumb topping, it could quite possibly change your life.”  That might not be far off, actually.

Bottom line:  I wouldn’t go to Karl Strauss for the burgers.  Go for the beer, atmosphere, and mac and cheese.