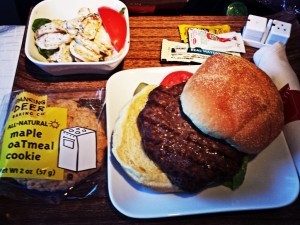 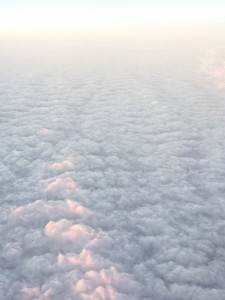 I thought I would take a quick diversion and review a surprisingly decent hamburger that I had on a recent Delta Air Lines flight.  When you think of a hamburger being served on an airplane, you don’t exactly think about someone standing around near the cockpit cooking burgers on a grill.  Expectations are low because it has to be reheated – presumably in a microwave – and that should mean a flavorless burger and a soggy bun.  Well, it never ceases to amaze me how Delta manages to make the bun taste toasted, make the burger look like it was recently grilled, and preserves most of the burger taste.  This burger was decent!  It’s not anywhere near an “A” burger.  It’s more like a B- or a C+.  But honestly you would expect a burger on an airplane to be very disappointing and instead, this burger was very acceptable.  Let’s move on to the side.  Look at those pathetic looking scalloped potatoes.  I mean, who eats a burger with potatoes that are not fried?  But Delta has worked some kind of strange magic on the potatoes as well.  The potatoes are spiced nicely and are served just a tad al dente, giving them a nice flavor and texture.  It’s still just plain wrong to serve a burger without at least the option of getting a potato in the manner in which it was meant to be served (fried!), but if there is no option for french fries or tater tots, at least this second rate alternative tastes decent.  So there you have it – I certainly wouldn’t go out of my way to get this burger and if someone served it in a restaurant it wouldn’t stand out at all.  But, at 38,983 feet above the earth with no grill or fryer available, Delta has worked some magic to turn what could have been a sorry meal into a surprisingly acceptable burger experience.