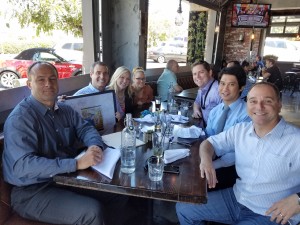 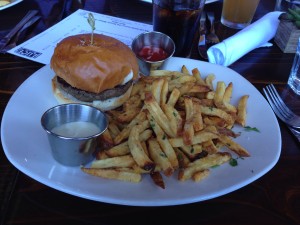 Today marked an historic occasion for the burger club. Brad (that smiling fellow on the left, above), our founder and burgermeister-in-chief, will be bidding farewell to San Diego in favor of the fine city of Atlanta, Georgia. While we’re sad to see him go, we will carry on – though in fairness, I’ve never found going out for a burger and fries to be a prospect that needs much selling.

We found ourselves at Luce Bar & Kitchen in Bay Park to take on their Luce Burger, due in part to the recommend of one Yelper who said, “My girlfriend would[n’t] even speak to me while eating and then didn’t want to let me try it.” While the offering had really great elements, it lacked the hush-inducing quality that some of the best burgers possess.

The most consistently lauded component of the meal was the fries, which were crunchy and well-seasoned, even if lacking a little in overall length (an important metric for anyone keen on a positive ketchup dipping experience). That said, as the temperature of the fries cooled, so did the group’s opinion of them. Similarly, the burger, while starting out juicy and flavorful, was generally considered dry by the end, with most of the juiciness left on the plate.

Despite the patty performance, the other elements of the burger were generally positive. Fresh arugula and tomato were a great complement to the melted white cheddar and caramelized onions. I found the brioche bun to be very tasty and able to hold up to the juices from the burger, though there were comments of it being a little too bready. Personal preferences aside, the experience ranked a strong B, with support from Brad’s A- rating.

While not enough to break into the upper echelon of our burger rankings, it was a singularly enjoyable experience to reflect and reminisce on the years and meals we’ve shared, and I look forward to those to come.

One thought on “Luce Bar & Kitchen”