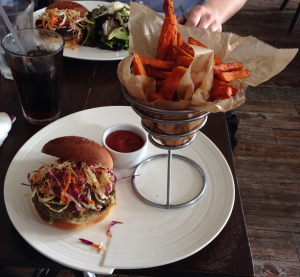 This year we debated whether to go to Slater’s or Hanna’s for a Thanksgiving turkey burger.  In the end, we decided we better go to Slater’s because their Thanksgiving turkey burger was the burger of the month and wouldn’t be available later.  But, a number of our members had never been to Hanna’s, so we decided we would go to Hanna’s for the following meeting and compare their turkey burger to the Slater’s version.  The result?  They are two very different turkey burgers and both are excellent.  Hanna’s did keep its A rating and thus edged out Slater’s, but comparing the two turkey burgers is almost like comparing apples and oranges.

I would say there was a fair amount of skepticism about Hanna’s Thai Turkey burgers when we were ordering them.  There were questions about it being a “Thai” turkey burger, and about the unavailability of regular french fries.  When the burgers arrived, some were questioning the choice of slaw on top and the green color of the burgers.  But then you put one of these burgers in your mouth and all your doubts disappear.  Flavors start to explode inside your mouth and they linger and leave a kick of heat and spice in your mouth even after you have swallowed your bite.  What is causing that strange reaction in your mouth?  We may never know, but clearly Hanna has hit on a good combination of spices.

We also decided to try Hanna’s rosemary cookies, which always seem to be in short supply.  Certainly they were in short supply on this visit, as we bought the last three and cleaned them out.  The cookies also were a hit.  The noticeable-but-not-overpowering taste of the rosemary in the cookies serves as a final reminder that Hanna knows how to use spices in ways that many other restaurants have not yet discovered.

So Hanna’s keeps its A rating.  Breakfast, lunch, or dinner — I have never had a meal at Hanna’s that wasn’t outstanding.  This place is a hidden gem.  Highly recommended.