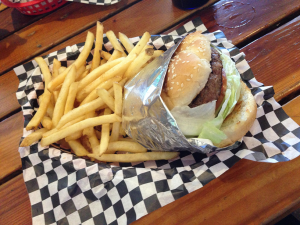 San Diego Burger Club went to Chief’s today.  It was a beautiful day in Solana Beach, but it was only an okay day for Chief’s, which earned a rating of just a tad over a B.

Chief’s got off to an interesting start when they delivered our burgers and even our waitress could not figure out which burger had blue cheese on it.  She then brought out someone else who appeared to be the cook, and the cook said the blue cheese was under the cheddar cheese — apparently rendering the Bleu Cheese Burger indistinguishable from the Cheeseburger.  Eventually they figured it out though and everyone got what they ordered.  The lunch sort of ended in a similar fashion.  We wanted to split the check evenly among the six attendees, and then have four credit cards pay 1/6 each, and one credit card pay for two people (so 2/6, or 1/3, on one of the cards).  I just wanted to buy lunch for one of our long-time Burger Club members who has decided to move to San Jose to try the burgers up there for a while.  It quickly became clear that was not going to work though, so we had to split the bill five ways instead.  We’re going to miss you Liz!  We’ll need to visit you in San Jose and try the burger joints there …

I have heard many people rave about Chief’s, and they have some reviews on their website to back up their reputation.  They also have nine burgers on the menu, and you can substitute a turkey or veggie patty for the beef on any of their burgers, so there is a burger on the menu for pretty much everyone.  Personally I have always enjoyed their burgers and fries, though I generally put them in the “good but not great” category.  With a B rating, that is about where Chief’s ended up today, though I note there were a few votes of B-, some Bs, and one A, so opinions varied.

Chief’s serves their burgers in foil wrap, which has always reminded me of a fast food burger.  A number of the (indoor) tables there also are picnic tables, which adds to that ambience.  I think the atmosphere at Chief’s is nicer than the typical fast food restaurant though.  A waiter or waitress takes your order, and there are clever signs and shirts on the walls with sayings like Unattended Children Will Be Given Espresso And A Free Puppy, or In Dog Beers I’ve Only Had One.  They also have a multicade arcade machine in the back corner, so you can play those favorite arcade games from the 80’s and 90’s.  And, of course, they have a number of TVs so you can watch … the Broncos.  Yes, I’m not sure why a bar for Broncos fans is called Chief’s, but it is.

In a nutshell, Chief’s basically earned a “good but not great” rating today.  Kind of like Slater’s 50/50, some people really like it, and some people think it’s okay.  I wouldn’t hesitate to eat there if I were in the neighborhood, but I probably wouldn’t make a special trip there unless I was with a Broncos fan.