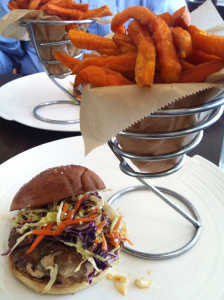 Jim and I debated whether one could actually call the Thai Turkey Burger at Hanna’s Gourmet a “burger”.  On the one hand, this burger lacked a lot of traditional ingredients, including (without limitation) beef, lettuce,  tomato, pickles, and onions.  On the other hand, the menu promised a patty of ground turkey, topped with slaw, on a house baked bun sprinkled with sesame seeds.  And it was paired with sweet potato fries.   When it came to the table, it certainly LOOKED like a burger.

Maybe it could best be described as a Burger Imposter.

I, for one, was prepared to be underwhelmed.  First of all, Hanna’s does not look like a burger joint.  It’s decidedly feminine.  All pastel walls and chandeliers – they had a selection of pastries in a glass case, for crissake.  Plus, when it came out of the kitchen the Burger Imposter was kind of …dainty looking.

Don’t worry, though.  Both of the Burger Club members in attendance let out satisfied “MMMMMMMMMs” after the first bite.  (And one of us was Jim!!)  Not convinced?  Well, the Burger Club member who couldn’t make lunch, and had to eat his Burger Imposter (reheated) for dinner later that night, emailed an uncharacteristically enthusiastic, “O.M.G.!”  The Imposter has flavor.  More precisely, it has flavors.  Lots and lots of flavors – and none of them that I recall were curry.  Totally unexpected in a Thai Turkey Burger.  Lest you underestimate how good this burger was, let me assure you that it was the kind of culinary medley that would put a dreamy look on Ruel’s face and cause him to look quizzically at the goodness in his hands (correct Burger Grip not required – the house baked bun held up spectacularly) and softly murmur things like, “Is that coriander….?”  The patty was beautifully seasoned, the slaw a perfectly crunchy counterpoint, and the bun springy rather than doughy.  The fries were crispy and their comparatively bland sweetness balanced out the spiciness of the Imposter nicely.  The ratings were unanimous.  We gave it an A.  (You heard me.)  And then, just as we were about to leave, we both admitted that we had been eyeing the Goat Cheese and Cardamom Crème Brulee in the girly pastry case.  Next time we are totally getting that.