A quick personal review:  I have passed by  Seaside Burgers and Sliders (in Terminal 2 of the San Diego airport)  many times, and this weekend I finally decided to try it.  Now that I have tried it, I will be passing by it many times in the future without eating there.

Seaside gets a C.  I wish I had put the ketchup packet on top of the burger so you could see from the picture just how pathetically small this burger is.  I mean, the bun was barely bigger than what I would have expected from a slider.  I can’t imagine how small their sliders must be.  Maybe the size of a quarter? 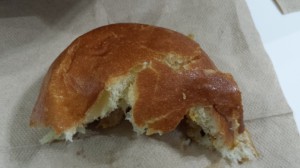 Notice that I said the BUN was barely bigger than a slider.  That picture of half a bun is the part of the bun that did not have any burger under it.  That’s right – nearly half the bun had no burger under it.  Where’s the beef, Seaside?

The half of the small burger that I did have?  It was the most well done burger I have ever eaten – crunchy on the outside and thoroughly cooked on the inside.  It wasn’t terrible, but it was VERY well done. 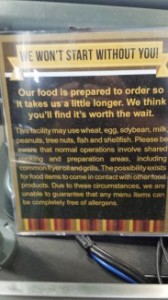 Notice that false advertising sign by the cash register?  That burger came out WAY too fast to be cooked to order and also be well done, even at that tiny size. 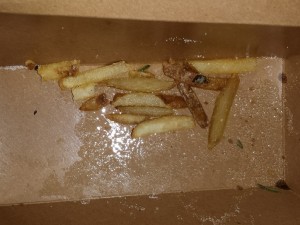 Then there were the fries. The top layer of fries wasn’t too bad, especially after I salted them thoroughly. They were a bit potato-ey and not quite as freshly cooked and warm as I would have liked, but they weren’t that bad.  Look at the bottom layer of the fries though!  They are thoroughly and unedibly drenched in grease.

Finally, while I get that airport food is going to be overpriced, $12+ for this tiny burned hamburger and these partially edible fries is pretty much highway (or maybe runway?) robbery.  I’ll be passing by Seaside Burgers and Sliders in the future.  I suggest you do the same.