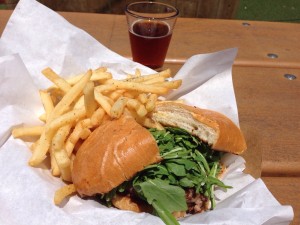 The Green Flash Gastro Truck is open the same hours as the Green Flash tasting room — that means they are closed on Monday, they open at 3pm Tuesday – Thursday, and they open at 12pm Friday – Sunday.  That limits the opportunities to go there for lunch during most people’s work hours, and also reinforces the fact that the experience at Green Flash is mostly about tasting the beer.  The burgers are clearly secondary (or tertiary, or beyond).  This also is reinforced by the fact that — unlike Stuffed — the Green Flash Gastro Truck only has one burger on the menu.  In addition, if you like cola or Sprite / 7up with your burger, you are out of luck.  The truck does not serve drinks.  If you want something to drink, you either need to get a beer inside the tasting room, or else there is a vending machine that has water, root beer, orange soda, and a few other drinks — but not much that resembles a soda fountain at a typical burger joint.

So how did we like the burgers?  Our reviews ranged from B+ to C+, with the average coming out to a B.  A couple of us felt that the “onion jam” on the burgers had kind of a funky taste to it that really was not to our liking.  The highest rating came from a member whose burger did not have much onion jam.  So, we suggest you get the burger without onion jam.  The fries, on the other hand, were quite good.  They were cooked well and had a peppery seasoning that was reminiscent of the seasoning on the tater tots at Stuffed.

A couple notes about the ambience — the seating for the truck is at outdoor picnic tables in a beer garden.  This means lunch there is iffy on a rainy day (they told us that “sometimes” they put out a tent).  Now, we are talking about San Diego, so rainy days occur, like, never — but we actually had planned to go to Green Flash two weeks ago and it did happen to be raining that day, so we had to alter our plans.  You also have to show your id and enter through the tasting room to get to the food truck.  After they check your id they put a “starburst” stamp on your wrist, which I assume means you are old enough to drink.  If you are not a fan of having ink on your body, I think you could decline the stamp, as people of all ages are permitted to tour the brewery.

As we left Green Flash, we took a left onto Sequence Drive and lo and behold there was the Stuffed truck — as if to emphasize that we should have eaten there instead.

Bottom line:  If you want to taste the beers at Green Flash around lunchtime or dinnertime, the burger at the Gastro Truck is fine (if you order it without onion jam) and the fries are quite good.  If you are just looking for a burger though, there are better options in the area including their relative the yellow Stuffed truck.