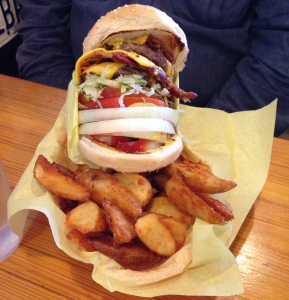 San Diego Burger Club went to Hodad’s downtown today.  I have been to the Hodad’s in Ocean Beach before and it can be VERY crowded with a line out the door.  I’m not sure whether it was due to this being a weekday or just due to this particular location, but there was no line at the downtown Hodad’s today.  We got there a little after 11am but we left after 12pm and one could walk in and be seated immediately throughout that time.

We all made the mistake of ordering double burgers.  The waitress said the patties were 1/3 pound each, but these burgers were just humongous.  When the burger pictured above arrived, the word “zounds” actually escaped from the recipient’s mouth.  There was no chance of getting one’s mouth around such a fully loaded burger, and with the bun unable to hold it all, it ultimately devolved into a fork and knife affair.  While that is not actually a very burger-like experience, it was noted that the ingredients in the burger were good and the bacon was well cooked and generously portioned.  For my part, I actually did not finish my burger — which may be the only time I have not finished a burger that was put in front of me.

We noticed an interesting dichotomy with these burgers – they were super juicy in the sense that two of us sadly ended up with grease on our pants, but at the same time the burgers did not actually taste very juicy.  I’m not sure where all that grease was hiding, but apparently it much prefers to be in your lap than in your burger.  Basically, the general feeling was that the burgers were decent tasting, but not really anything special — good but not great.

For sides they have fries, onion rings, and frings.  The fries are steak fries and while most of them were cooked appropriately, some of them were a little underdone and overly “potato-ey”.  In my opinion there is only so much you can do with thick steak fries anyway, and Hodad’s would be better served by adding thin fries and tots to the menu (and as long as you’re at it, why not add waffle fries too

The meal cost about $16 each (with tip), plus a buck to feed the parking meter on the street.  That’s not super-cheap for a burger joint of this caliber, but it’s worth noting that you can (and probably should) save a few bucks by ordering the single burger rather than the double.

Two tips emerged from all this:  (1) a single patty burger is plenty — these are big burgers with lots of toppings and a double is just more than you need on most days; and (2) be careful what pants you wear, and how you eat, and make sure you have lots of napkins in your lap, because apparently you have about a 2/3 chance of getting grease in your lap.

Overall we all felt the meal was good but not great, and all votes were for a “B” so Hodad’s gets a B. 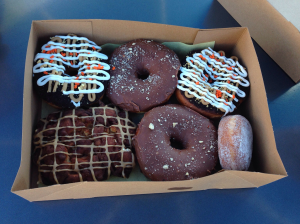 Now, the downtown Hodad’s is only a few blocks from Donut Bar, so we also hit up Donut Bar.  For the most part the doughnuts were delicious, though the chocolate caramel apple fritter thing in the lower left of the picture was dry and overcooked in parts.  It turns out that is a vegan apple fritter, so maybe that had something to do with the dry taste as well.  Also, the Hodad’s burgers were so gigantic that — despite how delicious Donut Bar doughnuts are — it really was all too much.  There was some heartfelt groaning afterward due to … let’s call it being “overly full and satisfied”.  For the record the doughnuts did not affect the Hodad’s review — we rated Hodad’s before starting in on the doughnuts.