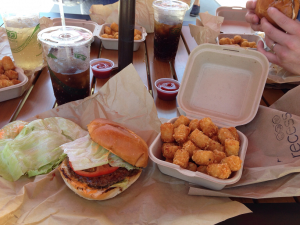 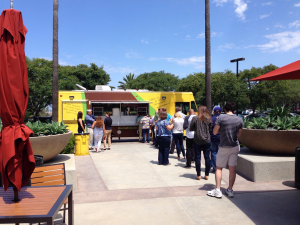 San Diego Burger Club went to Recess Food Truck on Eastgate Mall today.  The Eastgate Mall location is in the middle of an office park.  Parking was accessible and there were a number of outdoor tables (most with umbrellas for shade) at which to eat.

We arrived around 11:45am and there was a decent line at that time.  The line got longer and longer over time, though we only had to wait a few minutes to order and a few more minutes for our food since we beat most of the crowd.  Here is an important tip if you plan to eat at Recess — you can order online (you must order by 11am), pay by PayPal, set a pickup time, and avoid the line and the wait.  We didn’t try that, but if you plan to arrive there during the lunch rush, ordering online might be the way to go.

Now as to whether you should actually eat there … we were not very impressed.  The clever burger names and dressed-up tater tots — which include a variant on nachos made with tots and appropriately named “Totchos” — did nothing to save this place.  One of us was impressed by their burger, but three of us thought the burgers mostly tasted like the sauce on them and nothing else, one of the orders of tots was not sufficiently crispy, one of the burgers did not fill the bun (resulting is several bites that were all bun and fillings with no burger), one burger was not sufficiently cooked, and one burger was unevenly cooked.  Inconsistency is the name of the game here, and the result was that only one meal out of four turned out well.  Also, there is no dessert at Recess.  When Stuffed Burgers Food Truck with their Fried Oreos is your competition, coming to the game with no dessert at all seems a bit anemic.

Somehow Recess eked out a B rating, but it’s not a very enthusiastic B.  For the same price (around $11), I would much rather cross La Jolla Village Drive and head over to Five Guys Burgers and Fries, even though Five Guys also received a B rating.